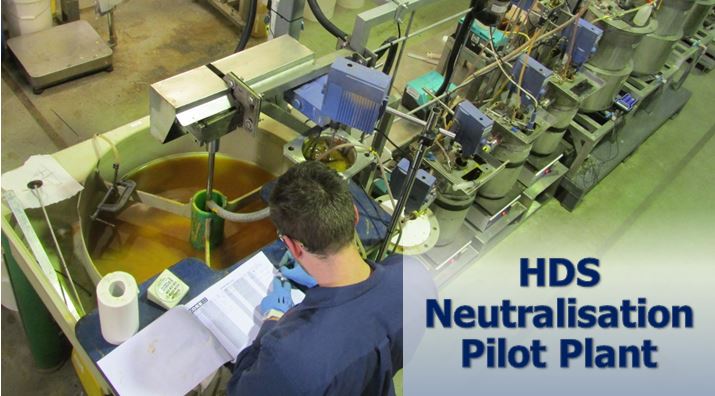 Core recently completed a 3 week High Density Solids (HDS) neutralisation pilot plant programme. The goal of the programme was to develop benchmark data for use in the development of a number of the client’s copper leach projects.  The programme investigated a range of process conditions in a continuous pilot plant circuit.

The pilot trial studied the precipitation of iron, aluminium and arsenic from a sulphate system, with a particular focus on the dewatering characteristics of the neutralised slurries. Dewatering characteristics of a thickened slurry are directly affected by the morphology of the precipitate crystals, and several process conditions were designed and tested in the pilot to optimise crystal formation.  These included operating the pilot with a range of pH levels across the neutralisation circuit, recycle ratios and leach residence times.

The pilot plant was conducted in continuous mode, with the effect of recycling from different points of the circuit also being investigated. Campaigns were run continuously without halting feed liquor and operated until steady state was achieved after each condition change. Newly developed single reactor continuous testwork was conducted at Core ahead of the programme, to provide preliminary screening and development of baseline conditions and dewatering data.

Core played a key role for the client in process engineering, design and process modelling services to maximise the value of the data obtained.  The programme took advantage of Core’s integrated testwork and engineering capabilities in assisting the client with the development of their projects.